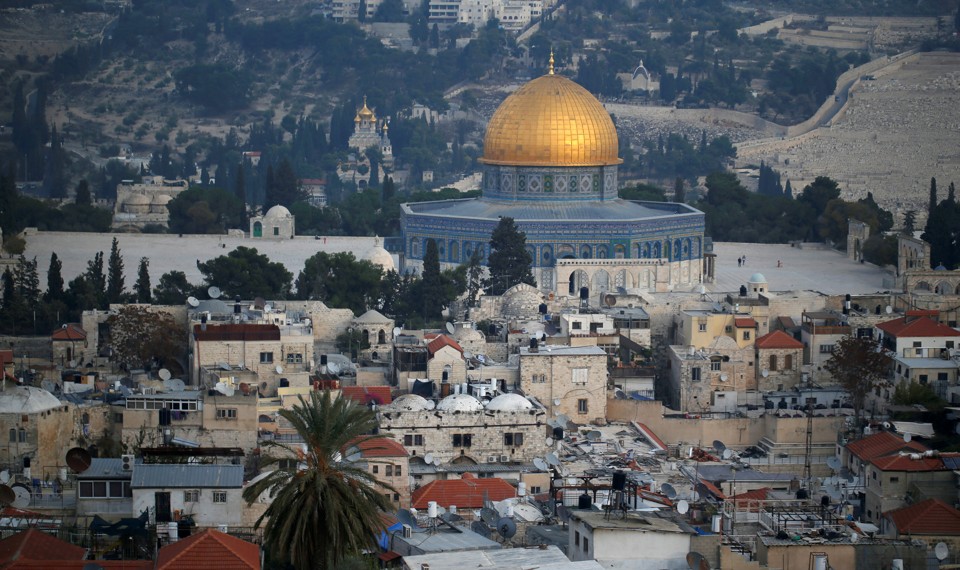 ‘Jerusalem Is Not the Explosive Device—It’s the Detonator’

President Trump’s announcement on the status of the holy city could spark a crisis across the Middle East.

JERUSALEM—Even before reports suggested President Trump will declare that Jerusalem is the capital of Israel and eventually move the U.S. embassy from Tel Aviv to Jerusalem, officials were predicting that the announcement would create chaos. By predetermining the final status of Jerusalem, Trump’s announcement would derail any hope for an Israeli-Palestinian peace process, and spark violent protests across the Middle East.

Foreign leaders from across the Arab world have been warning the Trump administration of the potential for violence. King Abdullah II of Jordan, which has custodianship of Christian and Muslim holy sites in Jerusalem, told U.S. lawmakers that the move could be exploited by terrorists to stoke anger in the region. Turkish President Recep Tayyip Erdogan threatened to cut diplomatic ties with Israel if the U.S. moves its embassy, and Saudi Arabia also condemned the plan. Saeb Erekat, the general secretary of the Palestinian Liberation Organization, said the move would “promote international anarchy and disrespect for global institutions and law.”

But for all the warnings that Trump’s embassy announcement could cause unrest, the biggest drivers of violence are actually threats to Jerusalem’s holy sites, said Daniel Seidemann, a left-wing attorney who runs the NGO Terrestrial Jerusalem, which maps developments in the city. While he believes there’s a possibility of mass demonstrations and violence in the broader Arab world, “the threat that this is going to cause an explosion and a bloodbath on the streets of Jerusalem is misplaced,” he said. “Jerusalem is not usually the explosive device. It’s usually the detonator. There is almost invariably one thing, and one thing only, that creates that spark, and that is the real or perceived threat to sacred space.”

When Jews all over the world pray, they face Israel. Those in Israel face Jerusalem, and those in Jerusalem face the Temple Mount, the site of Judaism’s two ancient sanctuaries, which once stood on the same patch of land now occupied by the Al-Aqsa mosque. “This is all because we believe this is our capital,” said Arieh King, a right-wing member of Jerusalem’s City Council. “For the Orthodox Jew like me, Jerusalem is not just a place to live. It’s a way that you live. It’s in a place close to where everything important of our history happened … also in the future, [where] we believe the third Temple will be built.”

Palestinians feel just as strongly about the city’s religious significance. “Jerusalem is part of our faith. It’s the first place where Muslims started praying,” said Ziad Abu Zayyad, a lawyer and former minister of the Palestinian Authority. Not only is Jerusalem a symbol of national identity; it’s the home of one of the most important sites in Islam. “Al-Aqsa is in the heart of every Muslim,” Zayyad said. “It’s a red line. It’s the third holy place,” after the Saudi Arabian cities of Mecca and Medina.

This is what Palestinians in East Jerusalem will be watching for, said Zayyad: how Trump’s decision could affect the city’s holiest mosque, where Muslims believe the Prophet Muhammad prayed before he was transported to heaven. “If there is an announcement of Jerusalem and changing the status of Al-Aqsa, it will be hell,” he said. “The action of the people will be very furious.” No one will coordinate this reaction, he added. “It will be the people. Spontaneously, you will feel the reaction from the people.”

Already, there have been protests in the streets. By late Tuesday, photographs showed Palestinians burning pictures of Trump in Bethlehem. The U.S. State Department is reportedly bracing for potential violence affecting its consulates and embassies around the world, and warned U.S. citizens to avoid crowds and areas with heightened police presence.

In Jerusalem, Trump’s announcement is either hugely significant or hugely overblown, depending on whom you ask. “We call it in Hebrew—Jerusalem of heaven versus Jerusalem of earth,” said Tehila Friedman, a founding member of the Yerushalmit movement, which advocates for pluralism in the city. “My feeling is that we’re giving too much attention to the symbolic Jerusalem versus the real city.” Trump’s much-anticipated intervention on the status of Jerusalem may very well lead to a diplomatic crisis. But it cannot change the fundamentals of life in this deeply divided city, where residents have to go to work, buy groceries, raise kids, and commute, regardless of what the American president says about its status.

“What happens in discussions like this is that Jerusalem becomes an abstraction,” said Betty Herschman, the director of international relations and advocacy at Ir Amim, a left-leaning organization that researches issues in Jerusalem. “There are real people living here.”

Many of those real people have become skeptics, added Friedman, who identifies as a religious feminist. “Israelis are so cynical, really—sometimes way too much,” she said. “We’re joking now that Trump [has] become an Israeli politician, because politicians always talk very highly about Jerusalem and do nothing.”

Perhaps the cynicism is understandable—it’s exhausting to live out Jerusalem’s symbolism in the course of everyday life. And that holds true for many Palestinians as well.

“In general, Palestinians or East Jerusalem [residents] don’t believe anyone anymore,” said Shir Grady, a 25-year-old volunteer for 0202, an organization that translates Facebook posts from East Jerusalem, West Jerusalem, and ultra-Orthodox Jewish communities. “Not [even] the president. Like, ‘Okay, whatever, he’ll sign it, he won’t sign it.’” She said she and her team have seen a lot of posts opposing the embassy move: As one commenter said, “I don’t care about Trump’s announcement … no Palestinian right should ever be abandoned.”

Jerusalem has always been the greatest, last barrier to a peace deal between the Israelis and the Palestinians. When the United Nations partitioned Palestine in 1947, it left Jerusalem as an international city. Jews did not have access to holy sites in the Old City until 1967, when Israeli soldiers stormed the walled area of town during the Six-Day War. Since then, no country has recognized Jerusalem as Israel’s capital, including the United States, although several countries have periodically attempted to relocate their embassies to the city. Both Palestinians and Israelis make claims on the city, and proponents of a two-state solution envision a future in which West Jerusalem and East Jerusalem will be the closely neighboring capitals of two countries.

The United States has traditionally been seen as the fair broker for a peace plan—and an essential part of that role has been staying vague on the issue of Jerusalem. As a statement from the Palestinian Liberation Organization confirmed, traditional Palestinian negotiators believe the U.S. will be “disqualifying itself to play any role in any initiative towards achieving a just and lasting peace” with this announcement.

In the long run, the diplomatic effects of this could be huge. It’s not clear how Trump’s announcement fits into a broader diplomatic strategy in the region, including the president’s vague promises that he’s going to secure the ultimate deal between Israelis and Palestinians. “This is almost like stepping on a landmine,” said Shalom Lipner, a senior fellow at the Brookings Institution who previously served in the prime minister’s office in Israel. “To the extent that people think there is a realistic chance of some sort of [peace] process, they’re much more concerned that this will set back negotiations.”

Others don’t believe a deal is possible, or even actively hope America’s announcement will derail any further negotiations. “I wish for my children that this is true,” said King. “If Palestinians would get a state for themselves, it would be the biggest punishment for the Western world, the entire world.” For him, U.S. recognition of Jerusalem as Israel’s capital is a fulfillment of the messianic promise of the Hebrew Bible: “In the time before messiah will come, most nations will accept us as Jews returning us to our holy city … like the United States wants to do now.”

At best, said Yehudah Mirsky, an associate professor at Brandeis University who previously served in the Clinton administration and lived in Israel, this move will be a tangible affirmation of the United States’ support for Israel. “People have a hard time understanding why Israelis feel as insecure as they do, given Israel’s military prowess,” he said. “Israel is the only country in the world whose right to exist is talked about. This continuing charade of not recognizing the city it regards as its capital makes lots of rank-and-file Israelis feel like the deck is stacked against them.” Day-to-day life in the city might not change, he said, but “anything that lessens people’s sense of defensiveness here, and gives them a greater sense of self-confidence in their own future, is helpful.”

Like everything with Jerusalem, however, perceptions of whether that comfort is good vary widely. For the United States to declare Jerusalem the united capital of Israel doesn’t make it so. Trump’s announcement will “lead the Israeli public, including those who are in Jerusalem, deeper into clinical denial, or ‘occupation denial,’” Seidemann said, adding: “We’re sipping cappuccino on the edge of a volcano.”