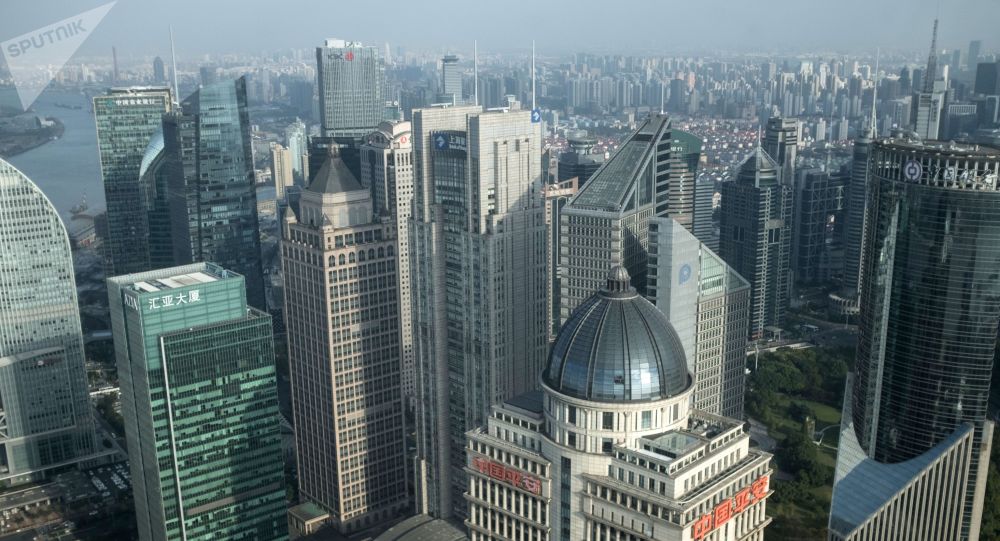 Beijing continues to demonstrate its commitment to the policy of openness and steady liberalization. Speaking to Sputnik, analysts underscored that China’s plan to give foreign investors greater access to its domestic market will benefit the country’s economy and help deal with systemic risk.

China’s decision to open wider its domestic market to overseas financial companies this year is a logical step that has nothing to do with US President Donald Trump’s political maneuvers toward the People’s Republic, says Xu Feibiao, an analyst of the Center for World Economy Studies at the China Institute of Contemporary International Relations.

„China pays great attention to financial stability, so in the past two years it has introduced a number of restrictive measures related to shadow banking, off-balance transactions, and financial markets. Therefore, the current statement for many was a surprise,” the analyst told Sputnik China.

Speaking at the World Economic Forum in the Swiss town of Davos on Wednesday, Liu He, a key economic adviser to President Xi Jinping, recalled that Beijing promised „further opening-up measures in banking, securities and the insurance sectors” on November 10, 2017, on the heels of Trump’s official visit to China.

„I would state in a responsible manner here, that we will implement these measures one by one this year, the earlier the better,” Liu stressed, as cited by Caixin Global.

The proposal includes relaxation of foreign ownership rules on insurers, securities and asset management firms, and banks. It will also ease restrictions on direct and indirect foreign ownership of fund management and futures companies, and brokerage firms to 51 percent from 49 percent. The limit is expected to be abolished entirely in three years.

Market Liberalization: Bringing the Economy to a New Level

Xu Feibiao pointed out that „the need for reform and greater openness of the financial sector was mentioned at the recent [19th National] Congress of the Communist Party of China.”

„In the report of the PRC President at the 19th Congress it was also stated about the need for market reforms and the internationalization of the yuan, in order to bring the Chinese economy to a new level in a new era,” the Chinese analyst noted. „In addition, given the growing influence of the Chinese economy in the world, and keeping in mind that the transition period for the PRC in the WTO [World Trade Organization] is over, China simply cannot continue to stay in the shadows.”

It seems that the new measures have become the largest concession to foreign companies on the part of China since the Celestial Empire joined the WTO in 2001. While the gradual liberalization of the Chinese economy could weaken the position of national businesses, the authorities implemented a pack of protectionist measures imposing restrictions on foreign investment and foreign capital.

What Prompted China to Open Up Now

The crux of the matter is that Beijing is facing systemic risks in the national economy. The total debt burden in 2017 exceeded 256 percent of GDP, with the share of corporate debt amounting to 170 percent.  For comparison’s sake, in 2017 in the US and Japan this indicator was 73 percent and 96 percent, respectively. This could be explained by the fact that for almost two decades — and especially in the wake of the 2008 global financial crisis — the Chinese economy has been growing largely due to lending to the corporate sector.As a result of huge long-term investments in social and infrastructure projects and real estate the sector has inflated dramatically requiring more and more credits to bolster the growth of GDP. The Chinese authorities are aware that this process is fraught with massive defaults.

According to Julian Evans-Pritchard of the international independent research company Capital Economics (Asia) Pte. Ltd., Beijing’s recent initiative is an attempt to borrow foreign experience and cope with the excessive leverage.

„[Chinese] regulators do not lose anything, slightly opening the door for foreign capital,” Evans-Pritchard told Sputnik. „[In exchange] they will get international experience and knowledge. In addition, the authorities, of course, hope that small competition will benefit the economy, the financial system will become more efficient and self-regulated.”

The specialist noted, however, that it is still unclear to what extent foreign investors will increase their participation in China’s financial sector. „Everyone is worried about the debt problem, the unclear role of the regulator and the rules of the game, as well as the authorities’ capability of controlling the movement of capital,” he emphasized.Still, China prepares to further open its market in the future: It has been announced that in 2019 class A shares which are currently traded in yuan only will be included in the international index of Morgan Stanley Capital International (MSCI).