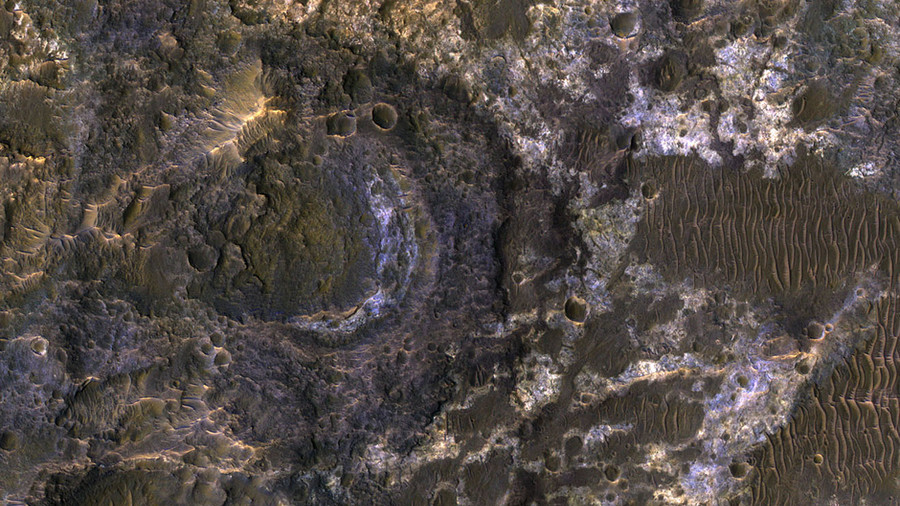 Clays of Ladon Basin © JPL-Caltech/Univ. of Arizona / NASA
NASA has released a stunningly detailed photograph of the Ladon Basin on Mars, providing valuable new insight on an area it believes could have been favorable for life on the Red Planet thousands of years ago.

The region is hugely interesting to Mars researchers because it shows significant signs of ancient lakes and rivers. The area features a huge impact crater, which was filled in with deposits left behind by a major ancient river called the Ladon Valles.

Take a look at this image from .@NASA's Mars Reconnaissance Orbiter that shows a spot that could have been favorable for life on ancient #Mars. >> https://t.co/OLMb0jqd0X pic.twitter.com/XC6QLehFgj

„These wet sediments were altered into minerals such as various clay minerals,” the space agency said in a statement.

“Clays imply chemistry that may have been favorable for life on ancient Mars, if anything lived there, so this could be a good spot for future exploration by rovers and perhaps return of samples to Earth.”

Large elliptical craters have previously been identified in the basin. These craters are formed when asteroids or comets strike the surface of the planet at a shallow angle. Studies of the crater patterns suggest the area was probably covered in ice which melted during the impact.

The picture was taken by a camera on NASA’s Mars Reconnaissance Orbiter (MRO). The MRO has been orbiting Mars since 2006 carrying out reconnaissance and exploration work.