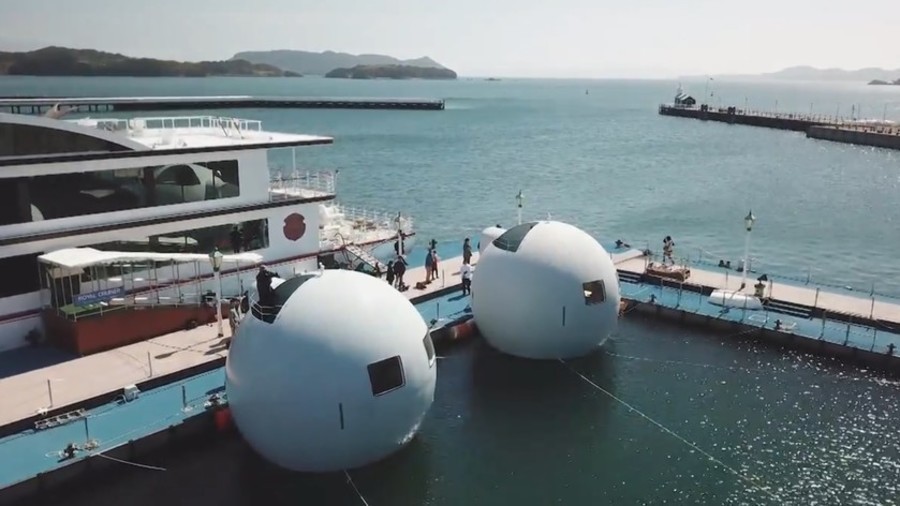 A new floating spherical hotel project claims to offer its guests unique protection against tsunamis. The Japanese enterprise is designed to protect its inhabitants from a sudden tidal influx – by simply rising above it.

Japan has created its first floating pod hotel as one possible solution to the country’s risk of earthquakes and tsunamis. The project is designed to protect guests in the case of a sudden tidal influx.

The novel capsule hotel was launched at the Dutch-themed park, Huis Ten Bosch, in Nagasaki on Monday. Shioji Tahara, the hotel’s concept designer, told Ruptly the hotel was designed “for the better safety of the general public so that we can have better protection against the tsunami [and] against any kind of hazards.”

The spherical capsule pod hotel has a glass ceiling, so guests can stargaze at night. The pods are designed to accommodate two or three people, Japan Times reports and comes complete with beds, showers and toilets. “It’s really comfortable there inside and if they can keep food, bring in some food by themselves, I think they can easily stay for one week or two weeks,” Tahara said.

“Because of the high buoyancy, it can go up, and the main part of the big wave is passing by beneath the boat,” Tahara explained. The pods are made from fibre-reinforced plastics.

Huis Ten Bosch has been working on the floating hotel idea since 2016. It will start trials of the pods this month, and hopes to open for business by the summer. The company plans to have a ship tow the hotel between the theme park and a nearby island.

Japan experienced a magnitude nine earthquake in 2011, which caused a massive tsunami that devastated the country and triggered the Fukushima nuclear disaster, with over 15,890 losing their lives.