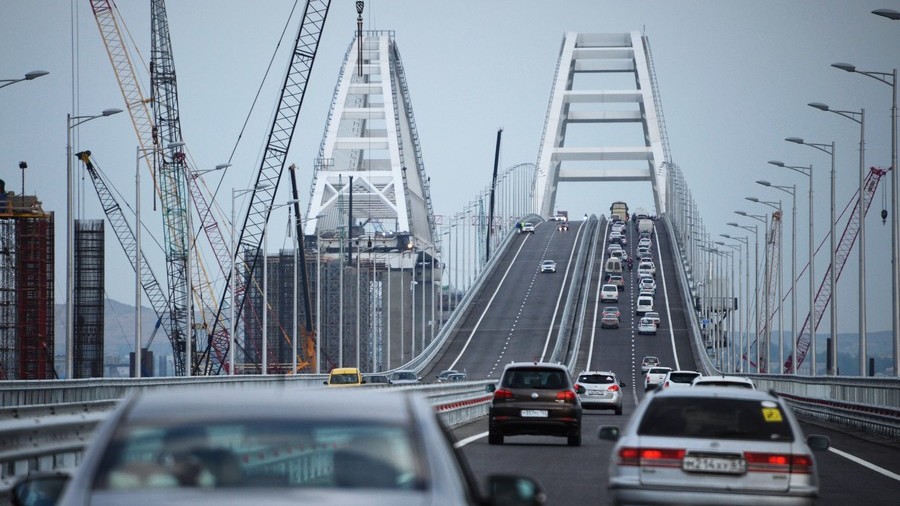 Crimean bridge is now open for traffic. © Aleksey Malgavko / Sputnik
Russia’s opening of a bridge to Crimea, a former part of Ukraine which officials in Kiev consider rightfully theirs, requires a swift bombing raid by Ukraine’s air force, believes a conservative US commentator.

The bold suggestion to the Ukrainian government to escalate a conflict with a much more powerful nation came on Tuesday from Tom Rogan, a prolific British-educated conservative commenter with the Washington Examiner. The Washington DC-based journalist sees the bridge, which was opened by Russian President Vladimir Putin, not as a major infrastructure feature. No – it’s Putin’s way to mark Crimea as his own, the journalist says.

“This bridge is an outrageous affront to Ukraine’s very credibility as a nation. Of course, from Putin’s perspective that’s the whole point,” he wrote. “The bridge cost Russia’s near-bankrupt government billions of dollars, but it offers Putin a formal physical and psychological appropriation of Ukrainian territory.”

So an air raid on the bridge launched by Kiev is an appropriate response to the debacle, believes Rogan, whose background apparently includes a BA in War Studies from King’s College London.

“Fortunately Ukraine has the means to launch air strikes against the bridge in a manner that would render it at least temporarily unusable. Because of its significant length, the Ukrainian air force could strike the bridge while mitigating the risk of casualties by those traversing it,” he said.

So what would Putin do in response to such an insult to his supposed ego? Not much, according to Rogan. He will order an “escalation against Ukrainian interests in eastern Ukraine,” which, the commentator claims, is inevitable anyway because Putin wants to “slowly absorb Ukraine rather than conquer it outright.”

OK, where do we start?

A “near bankrupt” Russian government exists in a parallel universe, where Russia’s economy produces only gas and is in tatters from American sanctions. Kiev’s desire to win back Crimea, the people of which are quite happy to be back in Russia, is doubtful: you don’t cut supplies of freshwater and power to people whom you want to see as your fellow citizens. And why would the Kremlin seek to “slowly absorb” its western neighbor with all its crumbling infrastructure, international debt and partially hostile population is beyond comprehension.

But suppose the government in Kiev will actually have the guts to directly attack Russia, taking inspiration from Georgia, which started its ill-advised military adventure in South Ossetia in 2008 by killing Russian peacekeepers stationed there. Does Ukraine really have the means to damage the bridge, which, among other things, is a military asset defended by Russian forces?

There are two regiments of S-400 anti-aircraft systems deployed in Crimea – primarily to defend the Russian naval base on the peninsula. But their range is more than enough to shoot down missiles and aircraft trying to hit the bridge. Judging by what Rogan wrote elsewhere, he doesn’t doubt that the S-400 could make the better-armed Israel think twice.

Ukraine’s military assets remain in poor shape despite four years of increased military spending. It has several dozen Soviet tactical, ballistic missiles of the Tochka type – the weapon system closest to delivering an airstrike with no risk of losing manned aircraft – but it’s not clear how many of them are ready to be launched. The Ukrainian military would also have to deploy dozens of launchers within less than a hundred kilometers from the bridge to have a chance to overwhelm Russian defenses, and do so discretely to avoid preemptive counter-measures.

Ironically Rogan joins a long list of experts and politicians in Ukraine who have suggested various scenarios of attacking the Crimean bridge in the past few years, from retired general Igor Romanenko, who too envisioned a devastating airstrike, to nationalist leader Nikolay Kokhanovsky, who said his group “may hang a banner there” – or simply attack a Russian diplomatic mission instead. As the saying goes, the dog barks, but the caravan goes on. 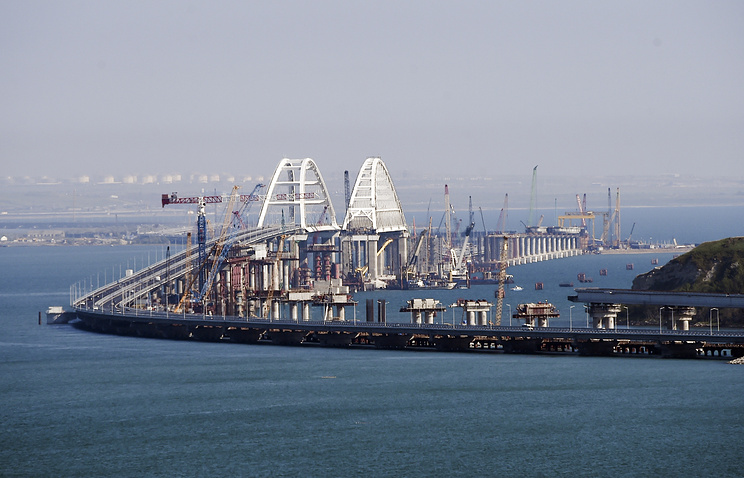 SOCHI, May 17. /TASS/. US law enforcement agencies should pay attention to the article in the Washington Examiner calling on Ukraine to blow up the newly-built Kerch Strait Bridge linking Crimea with mainland Russia, Acting Kremlin Spokesman Dmitry Peskov told reporters on Thursday.

„This [article saying that the bridge should be blown up] may be viewed only as madness, probably, this is the ugly manifestation of low-quality journalism verging on the calls, to which law enforcement agencies, including in the United States, should pay attention,” Peskov said.

Russian President Vladimir Putin took part in the opening ceremony of the Kerch Strait Bridge’s motorway section on May 15, driving the lead vehicle of the construction equipment convoy. The construction of the bridge linking the Crimean Peninsula with mainland Russia kicked off in February 2016. The construction of its railway section continues, its opening is scheduled for 2019. The bridge originates on the Taman Peninsula, runs through a five-kilometer dike area and the Island of Tuzla, then crosses the Kerch Strait and reaches the Crimean coast.

On May 15, the Washington Examiner published a provocative article by Tom Rogan, which calls for blowing up the Kerch Strait Bridge. Thus, Rogan wrote in particular that „Ukraine should now destroy elements of the bridge” and that it „has the means to launch air strikes against the bridge.”.