Shocking Video – Platoons of Heavily Armed Men Easily Walk into US from Mexico. 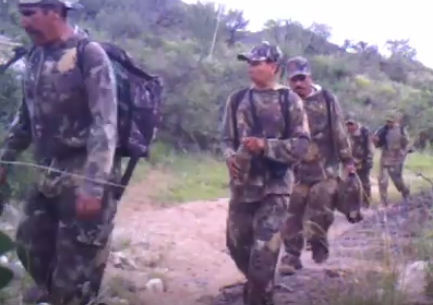 Men in camouflage and carrying large packs and ‘assault rifles’ were video recorded illegally entering the US at the Chilton Ranch in Arizona.  This area is known as ground zero for illegal entry into the US for drug cartels, smugglers, and illegal aliens.  Jim Chilton, 79, is a fifth-generation cattleman who has repeatedly warned the government not to leave long stretches of the southwest border secured by nothing more than a barbed-wire fence.  Concealed cameras along trails through his 5,000 acre ranch prove the point better than words.  A U.S. Border Patrol agent was shot by smugglers in a remote section of Chilton’s ranch in June 2018. [In spite of brave talk in Washington DC about stopping illegal immigration, the government has done nothing to stop this armed invasion. Why do we have soldiers in over a hundred countries in the world but none at the Chilton ranch?] -GEG

Video footage from a ranch in Arizona shows thousands of illegal aliens marching into the United States uninterrupted because there is no border wall, nor border patrol, to stop them.

Jim Chilton, 79, owns a 50,000-acre ranch situated on the U.S.-Mexico border, which has become a hotspot for illegals crossing into the country.

Certain shots show illegal immigrants pouring into the country literally by the dozen.

According to The Los Angeles Times, Chilton carries a pistol and a rifle while tending his cattle to “ward off the drug smugglers who encroach on his land.”

More footage of illegal aliens pouring over the border: